After Bitsy passed away, we knew we didn't want Hank to be alone for long. The hard part was actually finding a dog - the shelters are SO picked over right now if you want anything but a pit bull, which I love all the pits I know, but Nick and I have a type at this point and pits aren't it.

But along came Meatloaf, who wasn't exactly what we were looking for, but ended up being what we fell in love with.

Meatloaf was listed as a Husky mix but is definitely not that. My best guess is that she's mostly but not entirely Cattle Dog, and I expect maybe some Shiba or Basenji in there too based on her coat, face shape and attitude.

She's about two years old, and was dropped off at the shelter because she nipped the family's kid, which like, ok. Clearly she had had next to no obedience training, no boundaries set, been given no reason to focus on people, and might be from a breed that has been bred to nip to herd animals. My first instinct after getting to know her was that she didn't nip out of aggression and therefore I wasn't worried about it. 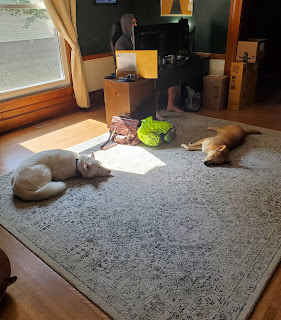 After that, she spent five weeks in the kennel, going on two overnight visits (a requirement before this shelter will let you adopt, which I think is great) and being rejected both times. On the second one, she was rejected because she played so hard she triggered the owner's other dog's seizures, lol.

She took a few days to settle in and warm up. She's a naturally anxious dog in new situations, and I don't know that her former owners took her out of the house much. She actually nervous peed in my backseat when I took her on the 7 minute drive to the barn yesterday. But with time in each situation, she settles down and becomes her outgoing playful self, so this is just something we'll have to work on. 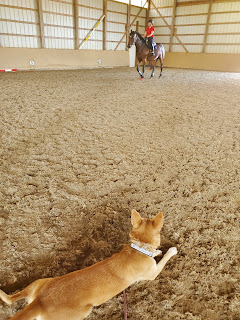 Yesterday, I had the perfect opportunity to see how she did at the barn when Mary came out to do saddle fittings for two friends and then ride one of those horses as payment (which she loved - she tolerates my ponies but warmbloods will always have her heart!). So it was 3 hours of me and Meatloaf standing in the aisle and the arena just chilling. 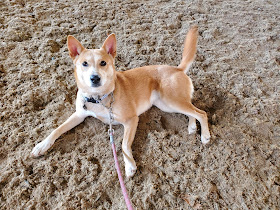 She was anxious and on guard the first hour, startled by the horses, but by the second hour she was relaxed enough to lay down and roll on her back for belly rubs. She got startled the first time Mary picked up the canter, but quickly got over it, making her already a better barn dog than Hank (who wants to play with the horses every time they start running, haha).

Bitsy was never a good barn dog and Hank requires too much energy and attention to bring to horse stuff if I'm by myself, so I'm excited that Meatloaf might be a good partner in crime for horse things.