We rode 2-2 on Saturday and 2-3 on Sunday to mimic what we'll have to do at NDPC next month. I've never done 2-2 before, because on paper it looks like a terrible test, not only in general but also in terms of highlighting what we're bad at.

I felt vindicated in my bad feelings toward it when I schooled it on Thursday night during my lesson and CGP was watching me like "Wait what? That's THERE? Are you kidding me? Did you ride that right?" I confirmed that I did, and I could feel her shaking her head.

After going off-course twice at the last show, I was determined not to do it again this time, which would be no small feat since I'd never ridden 2-2 before Thursday night. While running through it in my head over and over Friday night, I made a particular error once that I mentally noted felt dangerously easy to do, which is start 2-2 (which begins with two half 10m circles) as if it was 2-3 (which has full 10m circles in the same place).

Guess what I did in the ring on Saturday, ugh.

The rest of the test rode okay, for doing it in an actual lake. To add complete insult to weather injury, it POURED during my warmup, soaking me through, and then the sun came out for the first half of my test, making it feel like I was wearing a wet, steamy paper bag the entire test. 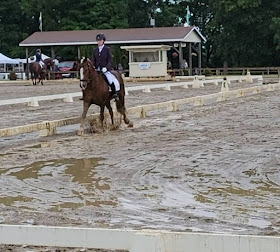 The simples, especially the counter canter to walk, were not quite as crisp as they are at home. He was a little behind my leg (I mean, do you blame the little guy, it has to take more energy to get through water that deep!) And I never quite got that same back lifted feeling that I did the day before. But even with the error, it was good enough for a 62%+.

On Sunday, CGP made me have a reader for the first time in my life, just "to break the cycle" of going off-course. I gotta be honest, I was pretty mentally shook up about going off course so many times since I started showing with her, because in my whole life up to the point, both Dressage and eventing, I'd only gone off course twice before, usually the first time I rode a test.

But this feels like another Second Level cliff thing. In the past, I focused a lot on riding the pattern correctly. Now, I'm focusing on managing the horse, half-halting, preparing for things, what his balance is like, what my body is doing, and a bunch of other stuff I've never focused on in the ring before, and I'm expecting the test riding to be automatic. Which is somewhat unfair to my brain given that I don't have access to a full-sized court at home, and the only time I get to school these tests completely is at shows.

Unfortunately, and I didn't think about this until it was way too late, nobody ran the idea of a reader past Connor. The first time we came down the long side past the reader during the test, Connor TELEPORTED into the center of the ring.

In retrospect, I should've anticipated that, not that I could've done anything to mitigate it. He was very tired and behind my leg (to the point that I almost said "I should scratch" in the warmup, but my trainer said part of learning how to show is learning how to best present the horse you have that day, and she was not wrong), and he was going to look for an excuse to get out of the work, and one presented itself.

The rest of the test kind of sucked - he was super behind my leg, very tense and broke in the second canter serpentine. I was fully expecting a 55%, and was absolutely stunned to receive a 60.8% and some genuinely helpful feedback from the judge.

Ultimately, the scores didn't matter to me. My goals for this weekend were to practice as if this was NDPC, get through 2-2 the first time, and on Sunday, my goal was to not go off-course, and I did all of that. So while I wish the scores were higher, I came away from it happy and feeling accomplished, and with a plan to make NDPC go more smoothly.