This all started because the Welsh Central Regional seems like it's going to be a big deal this year. COVID-willing, we should have Welshies from all over the US and Canada coming to show at it in October.

So I thought, okay, this year I'm actually going to put some effort into our outfit, and that included buying a Pelham. It's technically okay to show in a simple snaffle, but Pelhams and double bridles are more traditional for Welsh under saddle classes.

With some encouragement from Mary, who thought I'd really like him in a Pelham, I tracked down what I thought was the same bit as my Bombers Happy Tongue Straight, only with Pelham sides. Except, it wasn't. 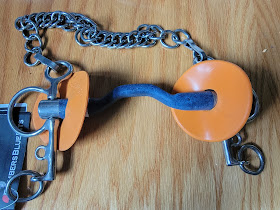 This one has a thicker mouthpiece that's made of a nylon composite rather than sweet iron. I was skeptical that Connor would like it since he's not always been a fan of thick mouthpieces in the past, but I gave it a shot anyway, first with two reins on Saturday.

I was surprised to find I actually loved it. He was quietly mouthing the bit a lot more than normal without being fussy about it, and I liked the little extra bit of control the curb gave me. I remembered how he liked the Herm Sprenger Nathe (until he started getting his tongue over that) and I started to wonder if he preferred non-metal bits, and if he'd go just as well in a snaffle version of this that's Dressage legal. So on Sunday, I took the curb rein off and just rode off the snaffle, as an experiment.

But of course, Pelhams aren't legal for Dressage, so as soon as I felt confident that he went well in it as a snaffle, I ordered the loose ring version, which is Dressage legal. It's possible that one of the things he likes about it is the way it hangs off of the bridle, but they don't have a Baucher-type version of this mouthpiece, so we'll see when the loose ring gets here I guess.

If he's going to be picky about bits, I'm glad he at least seems to love the Bombers line, which isn't making me quite as poor as other bit manufacturers would!