Although it wasn't super hot at this show, it was stuffy in the little indoor, and when they waived jackets Saturday morning, I was all over that, championship show be damned (I am also the first person to take my shirt off every day at CrossFit, in case you were wondering, lol).

Saturday was a rinse and repeat of Friday schedule-wise, with my ride being 8 minutes later than the day before's ride. But on Saturday, I gave myself an extra 10 minutes of warm-up so I could do a bunch of walk-only stretchy suppling work and focus on my own body before CGP tuned in. 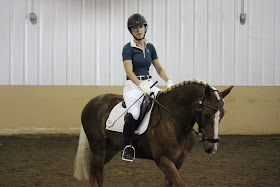 Several minutes into that walk work, my earbud started inexplicably playing 123456 by Fitz and the Tantrums. Erika heard it too and was frantically trying to figure out how to shut it off, but I was feeling it. Really can't think of a better song to start playing in the moment.

Hyped up, ready to go
I got my eyes on the prize
I'm sick of feelin' the lows
I wanna roll with the highs
I took a different path
I did it all on my own, so

When CGP connected, she said, "Wow, that looks a lot better than yesterday already!" and she made a comment about how my hands needed to be solid/firm but my elbows needed to be softer. Immediately, I could feel my lats engage and the circle of energy from the hind end feeling happen, and I knew where I went wrong yesterday. I spent the rest of the warmup thinking "anchor into the saddle, engage the back chain" and what do you know, I stopped pulling on him.

The warm-up was longer and more intense than I usually go for, especially on the second day, but oddly enough, I never felt like I was in danger of running out of horse. In fact, I never got that feeling in the show ring either, even toward the end of 2-3.

That feeling carried into the show ring where we just freaking brought it:

I mean. The shape of him looked like a totally different horse from Friday.

My own improvements were pretty awesome. I intentionally took a deep breath at least 3 times during the test. I thought one movement ahead and prepared for each one. I was anchored in the saddle and (for the most part) not pulling. And it paid off.

We got 7.0's on a 10m trot circle, on the right TOH, on a medium canter, and on counter canter serpentine (with the comment "nice jump"). Among the lower scores, we notably got a 6.5 on a trot lengthening, which, thankyouverymuch, we will take that!

As we turned down centerline toward the final halt, I couldn't stop smiling. I never smile during rides, but  I knew I'd figured something big out that day.

That said, I also knew it would only be rewarded with a score one or two percentage points higher than the day before, but I knew the lessons I took away from that test would change the game going forward, and that honestly mattered more than anything in the moment. All I ever want out of Dressage is to feel progress, and I certainly felt it on Saturday.

After 3.5 hours of waiting for the rest of the results to come in, when my giant class was done riding, we found out we had placed 4th out of 9 AAs in 2-3 with a 62.5%. And when the averages were calculated for the two days, we had placed 6th to take the last neck ribbon by the slimmest of margins. (0.5%)

Hyped up, look at us go
We could shoot for the stars
Gonna start a parade
Say the future is ours
It's a beautiful day
We did it all on our own, so

(Except we really, really, REALLY didn't do it all on our own!)